I can not express how excited I am that Paw Patrol finally has another DVD on the market! My daughter loves Paw Patrol, and we currently watch Paw Patrol: Meet Everest on repeat! As a mom, I don’t mind Paw Patrol on repeat because the pups are just so darn cute! When we received our Paw Patrol: The Great Pirate Rescue DVD in the mail, my daughter was over the moon! We had to stop everything we were doing, and pop it into the DVD player that very second! These seven episodes were such a hit, and it wasn’t a surprise when she asked if we could watch it again! You definitely don’t want to miss this adorable pup-tastic new DVD! 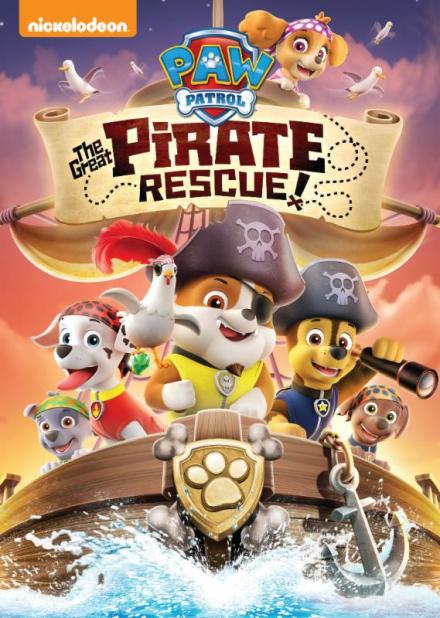 Pups and the Pirate Treasure: The PAW Patrol must rescue Cap’n Turbot after he accidentally stumbles into a secret cave that was once a pirate’s hideout. While there, they find an incomplete treasure map and embark on an adventure to find the missing pieces.

Pups and the Ghost Pirate: It’s Halloween and Cap’n Turbot is having a party on an old pirate ship! When the ship mysteriously starts to head out to sea captained by a “ghost,” the PAW Patrol must work together to save the ship and discover who the ghost is.

Pups Save the Bay: When there’s an oil spill in Adventure Bay, Ryder and the pups must rescue a baby whale and clean up the spill before any other animals swim through it.

Pups Save a Goodway: When Adventure Bay’s famous statue of Grandpa Grover Goodway ends up at the bottom of the Bay, Ryder and the pups have to help Cap’n Turbot raise it to the surface and get it to Town Square before Mayor Goodway’s family reunion.

Pups Save a Pool Day: On a hot day, the pups head to the water park where they discover that the pool is empty! It’s all paws on deck as they work to fix the broken water tower and get their pool day back on track.

Circus Pup-Formers: When the circus animals don’t make it in time for the show to start, Ryder and the pups step in and perform for Adventure Bay.

* PAW Patrol: The Great Pirate Rescue is available for pre-order on Amazon and will be released September 5th, 2017. *

*I RECEIVED THE PRODUCTS MENTIONED ABOVE FOR FREE IN RETURN FOR AN UNBIASED REVIEW. I ONLY REVIEW AND RECOMMEND PRODUCTS OR SERVICES THAT I HAVE USED PERSONALLY. I AM DISCLOSING THIS IN ACCORDANCE WITH THE FEDERAL TRADE COMMISSION’S 16 CFR, PART 255: “GUIDES CONCERNING THE USE OF ENDORSEMENTS AND TESTIMONIALS IN ADVERTISING”. THE OPINIONS EXPRESSED IN THIS POST ARE ENTIRELY MY OWN*