Disney On Ice: Reach For The Stars made its way to Baton Rouge Louisiana this past weekend and naturally my daughter begged to attend! We have attended several Disney On Ice shows over the past year, but I believe this is the one my daughter was most excited about seeing. Disney On Ice: Reach For The Stars featured my daughter’s all-time favorite characters such as Ariel, Belle, Rapunzel, Elsa, Anna, and so many more! We attended the Saturday 1:00 pm show, which I must admit I liked much better than the nighttime show. When we arrived, the entrance line was quite long. Thankfully we already had tickets so it didn’t take us long to make our way inside. Once inside we found the gift shop booths and Disney-inspired snack stands. Usually we try to make our way to our seats fairly quickly, but even with the rush of people the lines were not long whatsoever. The snacks and toys were much cheaper than I remembered them to be at past shows. We got a bucket of popcorn and a bag of cotton candy for under $30. The kids each picked a snack and a toy before we headed to our seats. 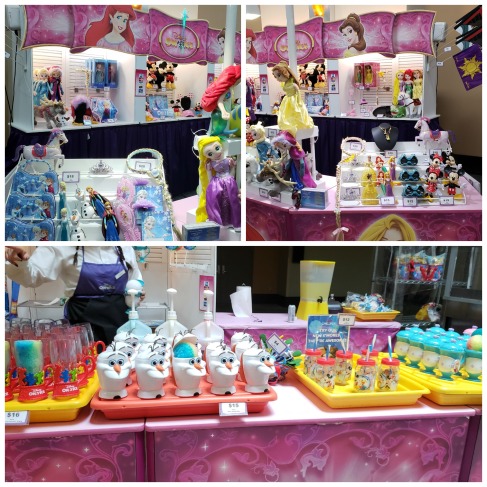 The seats we had for this show were our favorite seats EVER! We sat in Section 105, Row L, Seats 1-5.  There are never any “bad” seats at the Raising Canes River Center, however this time we had fairly low corner seats at the end of the aisle which made it easy for the kids to get in and out without disturbing other guests. 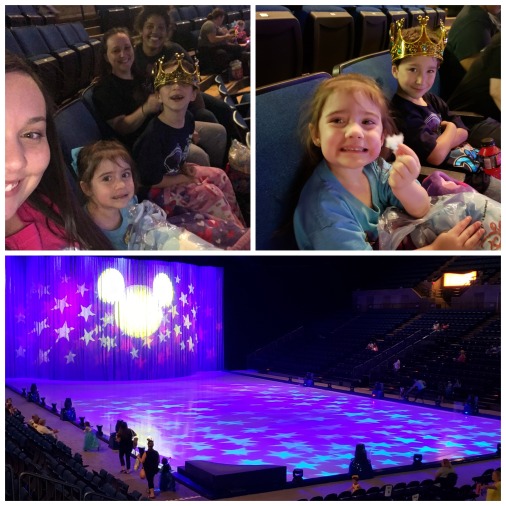 The show started with Mickey, Minnie, Donald and Goofy a funny little talent show. They introduced participants like Cinderella’s evil stepsisters, Anastasia and Drizella, who sang and danced a quite terrible number. They kept running into each other which set the entire arena into a fit of laughter. After Anastasia and Drizella left the stage, Mickey introduced Sebastian and Ariel’s six sisters who sang and danced to a cute little “Girls Just Want To Have Fun” number. While the girls were dancing, they realized that Ariel was nowhere to be found. Sebastian set off to find Ariel, which then led us into The Little Mermaid! 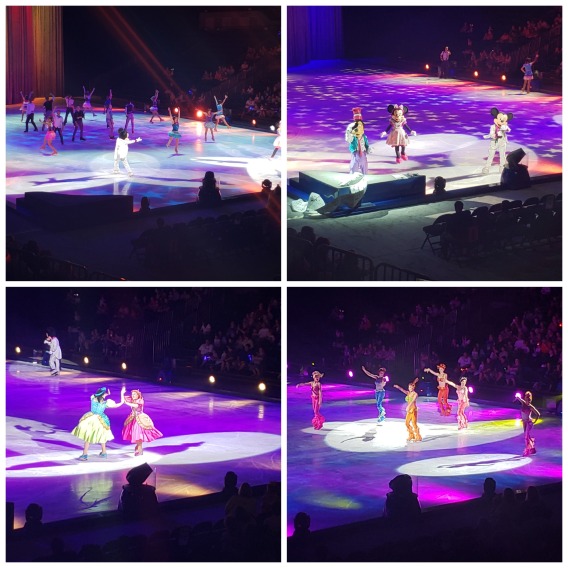 Ariel happens to be my daughter’s favorite, so when she “swam” onto the stage she was beyond excited! From start to finish my daughter’s eyes never left the show. Ursula made her appearance and the kids couldn’t get over how realistic she looked! The part of the show the kids loved the most was when Ariel traded her tail for feet. As she sang her song, she was lifted into the air and began doing some quite amazing stunts! I think it is safe to say that this was my daughter’s favorite part of the entire show.After the entire Ariel storyline was finished, Mickey and his gang introduced a gang of hooligans to the stage which then led into the Rapunzel storyline. 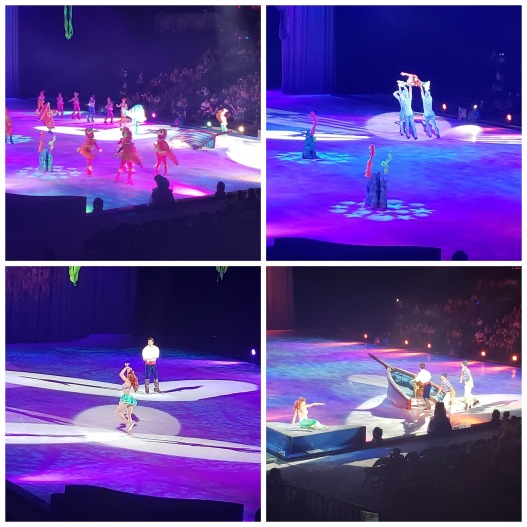 Rapunzel was accompanied by a very realistic Maximus and of course the extremely handsome Flynn Ryder! This act was one of the funnier shows since Flynn and Maximus often argue and Rapunzel smacks Flynn with a frying pan! After Rapunzel and Flynn got their happy ever after, Mickey introduced the next act which was Gaston singing about his favorite thing: HIMSELF! 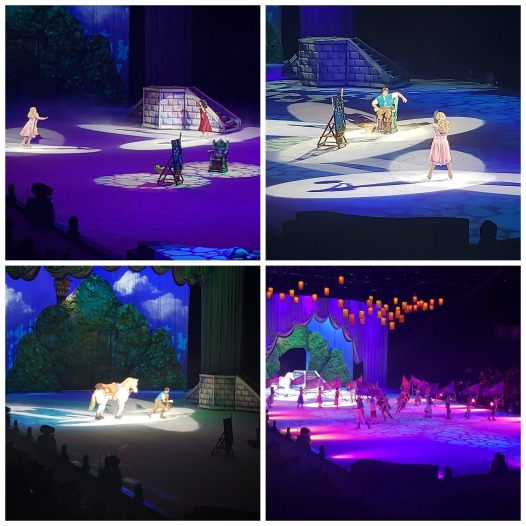 Gaston started off the show that introduced Belle. Beauty and the Beast is my personal favorite, so I knew immediately that this was going to be the best part of the show for me! Belle came out singing her intro song, and the kids went wild! Of course, it didn’t take long for Beast to make his appearance which was accompanied by some thunder and awesome light effects. Of course the song “Be Our Guest” was absolutely perfect as characters such as Chip and Lumière danced around the stage! There were even dancing plates just like the movie! I was a little upset that Belle didn’t change into her famous yellow gown, however this part was still my absolute favorite of the night!

The last act of the night was Frozen. As we could tell by the extremely loud screams in the audience, this was a crowd favorite. Anna and Elsa entered the stage accompanied by pops of light as Elsa used her magic. There were even real snow flurries flying around the air as Elsa sang “Let It Go”! Of course Frozen wouldn’t be complete without Olaf, so it was extremely fun to see him make an appearance and perform “Summer”! 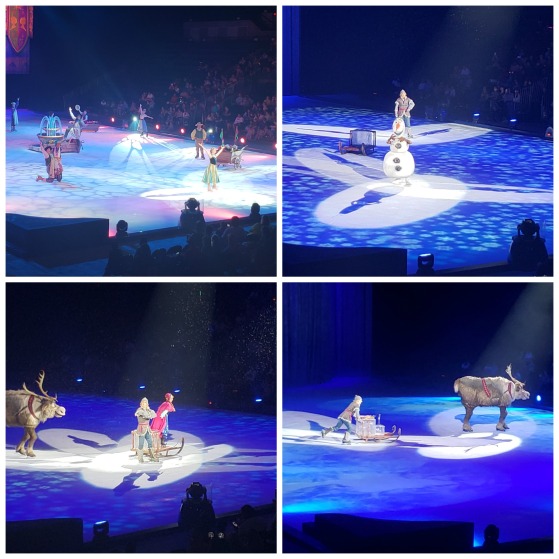 By the time the finale got there the kids were up and dancing in their spots. The entire event was so magical! There is no doubt in my mind that this was our favorite Disney On Ice show to date! I have no idea what Feld Entertainment is going to do next, but they’re going to have a hard time topping this one! 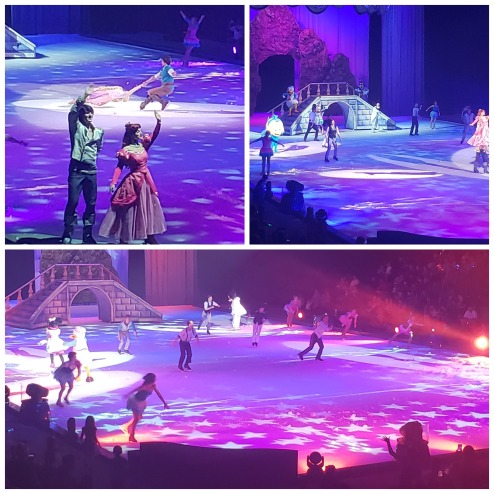 *For showtimes and ticket information, visit the Disney On Ice website. Tickets  range from $15 to $55. You can purchase tickets and check seat availability on Ticketmaster.*

This review was brought to you courtesy of Feld Entertainment.

*I am a Feld Family Ambassador and in exchange for my time and efforts in attending shows and reporting my opinion within this blog, as well as keeping you advised of the latest discount offers, Feld Entertainment has provided me with complimentary tickets to Feld shows and opportunities to attend private Feld pre-show events*

16 thoughts on “Disney On Ice: Reach For The Stars”