I remember watching the Muppets whenever I was a child, so seeing the new Muppet Babies show on Disney Junior had me over the moon! The show features all of the Muppets that we know and love such as Kermit The Frog, Miss Piggy, Fozzie The Bear, and Animal all as tiny little babies! This show instantly became a hit with my daughter and I would often catch myself stopping to watch them with her. That is why my daughter and I were both thrilled when we got our hands on this brand new DVD release “Muppet Babies: Time To Play”. This new DVD features 92 minutes of Muppet Babies fun, as well as 2 bonus episodes, 10 “Muppet Babies: Show & Tell” Shorts, and 6 Music Videos! Of course my daughter loved the episodes, but the 6 adorable music videos really stole the show! I can’t tell you how many times I have put those videos on repeat! The music video “You Can Be A Dancer” is by far our favorite. My daughter wiggles her toes and shakes her hips copying everything the Muppet Babies are doing! There is even a part where the Muppet Babies form a kick line during the dance, which I can’t help but run over and do with my daughter. Muppet Babies: Time To Play is such a hit with out Muppet-loving family! 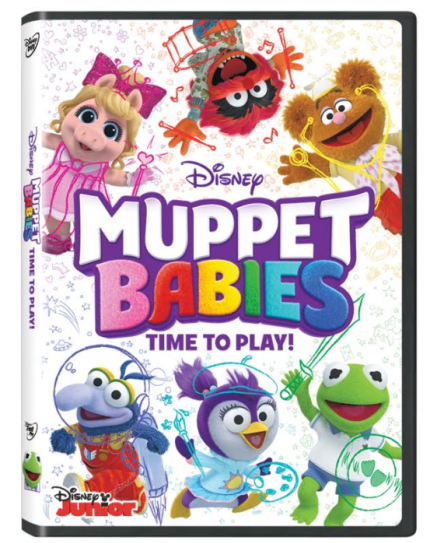 DVD Synopsis: Almost 30 years after the Muppet Babies first won the hearts of kids and families around the world, Disney Junior’s reimagined “Muppet Babies” chronicles the hilarious playroom antics of a young Kermit the Frog, Piggy, Fozzie Bear, Gonzo and Animal – plus a brand-new Muppet Baby, Summer Penguin. Under the watchful eye of Miss Nanny, the Muppet Babies use their imaginations to embark on countless adventures that take them to the farthest corners of the universe and demonstrate to young viewers the power and potential of imaginative play.

#AD Three generations of muffin lovers! Not only are @littlebitessnacks my go-to snacks for back to school, but they're perfect for on-the-go (like spur of the moment trips to Nana's house)❤ Little Bites Snacks from @entenmanns come in tons of great flavors and contain no high fructose corn syrup! A taste kids love + ingredients that mom feels good about= the PERFECT snack! Plus, the empty pouches can be donated to Terracycle to help earn money for your child’s school! It's a win all around! . . . . . #lovelittlebites #littlebites #littlebitessnacks #littlebitesmuffins #muffinswithmom #kidreview #momapproved #momapprovedsnacks #snacksthatmakeyoufeelgood #momslect #snacking #kidsnacks #onthegosnacks
Cutest furbabies on the block❤ . . . . #Ariel #Ursula #GuineaPig #GuineaPigsOfInsta #GuineaPigsOfInstagram #ArielTheGuineaPig #PetBlogger #GuineaPigOwner #UrsulaTheGuineaPig #ArielAndUrsula #ArielAndUrsulaTheGuineaPigs #GuineaPigMom #TheTaylorFamilyZoo #Olaf #Schnauzer #SchnauzersOfInstagram #MiniatureSchnauzer #dog #dogstagram #instadog #doglover #dogoftheday #pets #puppylove
#AD When you feel yourself catching a cold, what are the first things you reach for? My top three things are soup, tissue, and @zicam! Zicam® is clinically proven to shorten colds when taken at the first sign, so the second I get the sniffles I make sure my RapidMelts® are handy! The RapidMelts® are my go-to because they quickly dissolve in my mouth without water! Great for taking on-the-go. What do you do when feel the first signs of a cold? #hbtzicam #Zicam #ColdShortening #ShortenColds #ColdSeason #ColdAndFluSeason #SickMom #MomsDontGetSick #DadsDontGetSick #NoMoreSickDays #ad
Maybe one day she will sleep in her bed all night! Do you guys have any helpful tips we can try?🤔🦄 . . . . . #Kinsley #KinsleyGrace #PrincessKinsley #BigGirlBed #UnicornBedding #MomTips #MomBlogger